So after doing some blog updates and corp administration, I got straight back into it. Let the travels commence!

I really do enjoy being able to zoom through the boring systems, only taking photos if there’s something of interest, like landmarks or something. So far there hasn’t been. But let’s continue – I wonder if I can finish off Insmother today? If not today, maybe tomorrow.
At this point I realised I was going the wrong way, so I backtracked a bit to continue down the pipe I wanted to follow.

Oh no, not another one. Oh wait… This one was a bit different. It was a cloud of debris with a number of ‘ghost ship’ wreckages floating around in it. Maybe a convoy or something that got decimated in an attack, or a small battle occurred here. 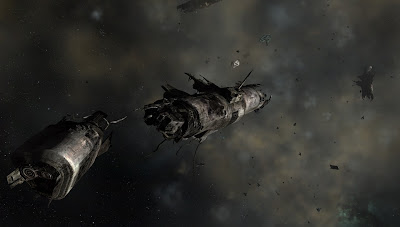 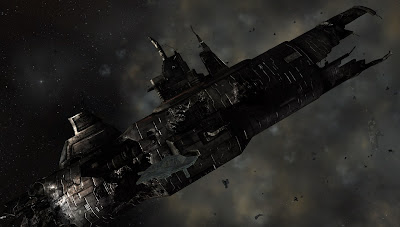 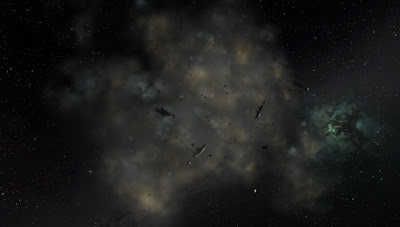 Either way, I took some pictures and then moved on.
I’m starting to get closer to some regional gateways here, to Detorid, and as a result I’m seeing more catch bubbles littered around the place, in systems empty of other pilots. These regional entry points are usually quite busy.
Interestingly, I’m finding an increased level of anxiety as I move back towards areas of ‘civilisation’. The more people around, the more hazardous it is. But I’ll complete this pipe and then return back down it to head into the centre of the map.
While there was nothing of interest here, it was filled with about 6 other locals. And there was a catch bubble 120km from the gate. I felt this system was active, so I activated my ‘extra caution’ alarms.
I flew to the planet near the next gate, and there was a catch bubble off the customs office, between it and the gate I wanted to go to. There were two other bubbles at my destination gate. Did they have a bubble ready to catch someone coming from this planet? Interesting.
I decided to warp to an asteroid belt further away, and then warped to the gate. I arrived right on the gate, and saw that there were two bubbles 100km away. One of them was in line with the planet I had warped to. These guys were obsessive! But they were aware of the tricks to avoid catch bubbles and had set up a trap to prepare for those that warped to nearby planets and then to the gates.
I may have been caught in their gate-bubble trap if they hadn’t placed a bubble on the planet’s customs office, alerting me to their tactics.
I safely moved on.
I decided to camp here for the night, on the edge of the Insmother region and the Detorid region. After looking at the map, I worked out that there was about 20 jumps to go back to the centre of the map, or I could do 11 jumps across a few regions to GDHN-K, at the bottom of the centre mass of systems on the map.
I thought about it, and decided that tomorrow I’d go back the way I came. I think it’s a better idea to keep my travels within a region as best I can, rather than shoot across various regions to get back into this one. Even if it’s longer, it’ll probably be safer than traversing a number of regional entry points within such a short range of each other.
The safer way is always the better way. 33 systems today – it’s been a good day. I’ll see you tomorrow!
Bookmark the permalink.