So I met up with Black Claw in N-DQ0D, which was where the closest station was. After a warm greeting, we did our exchange. I took a photo of him looking sadly at his ship for the last time before he contracted it over to me… 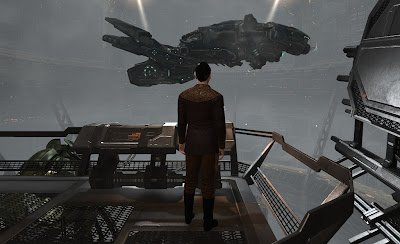 Except that once I tried to get in it I found out that I couldn’t fly the damn thing!

Probably would have been nice if I checked that before we did the exchange. I thought that I could fly the Proteus too, but it’s Black Claw that can fly all the different ships of all the different races, not me. Sad face…

Anyway, he was adamant that I should keep it, as long as I made sure I started training up in how to fly it. That might be a little while away yet, as there’s a few other skills I need to train up first. But he did get me to promise him that as soon as I’m in a region that has the Gallente skill books to fly the Proteus, I’ll make sure I get them and start training.

I also made sure I moved my medical clone to that station, so that if I die, I’ll wake up where the ship is. I just hope I’ll have trained up the relevant skills before that happens…

So in accordance with my new method of flying around, I moved on to the first landmark. That’s right, I’m chasing landmarks around the galaxy now, while also making sure I travel through every single system. The only photos of systems I’ll show will be when I find something interesting in them to take photos of. Like landmarks, for example.

A system that’s interesting only for its landmark, an abandoned research station.

In-space research laboratories are often established to circumvent planetside laws and oversight. As a consequence, an entire research industry has slowly emerged among the stars. One inevitable by-product of this relentless expansion has been the downfall of countless outposts and laboratories to failed experiments. Not only was the staff typically wiped out in these “accidents,” but the area was often left irradiated or otherwise unusable.

It was an old Amarr research station, left in ruins from some unknown disaster: 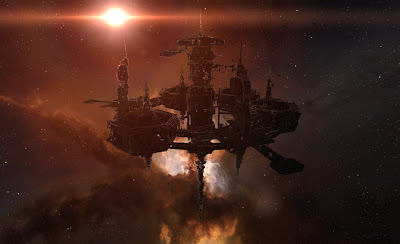 I think the Gistatis Legion had moved in and put together a small colony of fused asteroids and habitation modules. God knows why they want to live in the shadows of a ruined Amarr station like this: 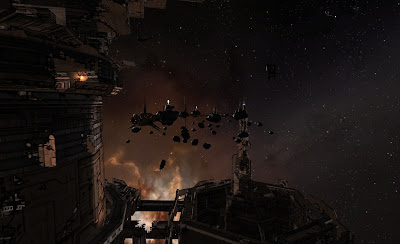 What with me being Minmatar and all, I was particularly interested in this landmark.

Fighting for a nation still in its infancy, the stoic and indomitable people of the early Minmatar Republic suffered frequent and catastrophic losses at the hands of the much larger Amarr Empire. Countless outposts on the edge of patrolled space fell to the scorching lasers of Amarrian marauders. To this day, these structures remain as silent reminders of freedom’s price.

I had a few moments of silence before taking a few photos. 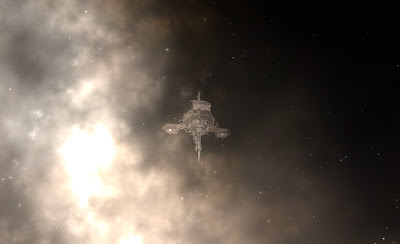 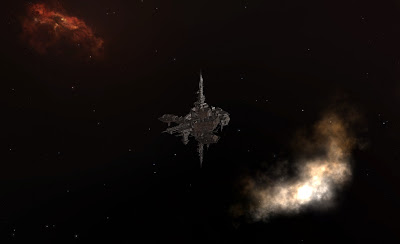 It’s obvious that this station was set up to take advantage of the nearby gas cloud resources, but now the only ones taking advantage of it are Angel pirate gangs. I didn’t bother hanging around to take them out. I’m here to travel the galaxy, not kill the rat pirates out there.

I flew on, through the following systems…

7JF-0Z – Made a new friend here, Michael Lovetto. He was nice and friendly, and cautioned me on the entry point to Etherium Reach (C-4D0W). I learnt a long time ago that regional entry points are always pretty dangerous. He also told me that it’s quiet around here. I knew that!

OJOS-T – Wow, this is a big system!  For the first time in my journey, I had insufficient power to warp to the next gate, which was only 273 light years away!  My power ran out only 12.8 light years from the next gate, so I took the opportunity to make a safe spot at that point.

…until I reached my next destination point.
66U-1P
This is another landmark system, with another ruined Minmatar Outpost. There’s lots of Minmatar areas out this way…. 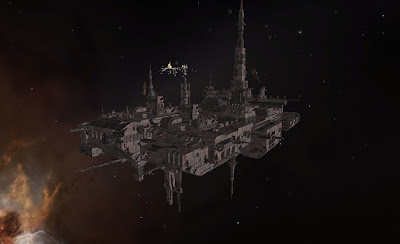 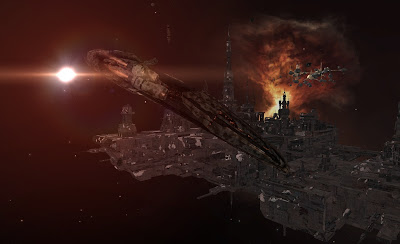 Once the sightseeing was over, I moved on through these systems…

JUK0-1 – nothing of interest

V-IH6B – This is the end of the road for this part of the region. I decided to rest here for the time being, before I have to fly back down the pipe to the next stage of my journey.

See you tomorrow!
Bookmark the permalink.