I decided to continue zooming through a few systems shortly after downtime, just to get them over and done with and out of the way. So I flew back down the pipe back to N-DQ0D, before heading in to LXTC-S to go up this next dead-end pipe.

LXTC-S – I briefly chatted with a lady by the name of cal dasiri who offered her ratting wrecks for me to salvage, but I politely declined. No time or interest in salvaging, let alone carrying the necessary tools!

4M-P1I – nothing of interest. Well, except for the fact it’s the end of the pipe, so I turned around and went back, dropping in on the little side system….

H-85FQ – nothing of interest, but always nice to get these out-of-the-way systems completed. I thought I’d take a photo of the customs office at the planet near the gate. 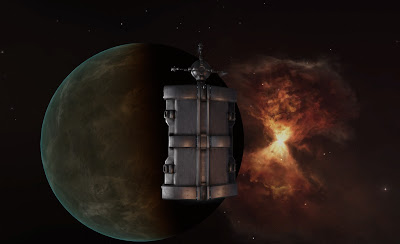 While it was so quiet around these parts, I decided to push on. It’s always a risk when you push on through unfamiliar territory when you’re feeling tired, but I have a goal, and that’s to get as many of these damn systems out of the way.

I know what to look out for, including my own fatigue. When I get too tired, I’ll take a break in whatever system I’m in, and get some sleep. But I’m not TOO tired just yet….

I flew back through systems I (or Black Claw) has already been through, so I won’t be worrying about recording them. Only the ones I’m entering for the first time.

8YC-AN – I jumped into this system and saw 3 warp bubbles near the gate. At first I thought maybe one of them was around the gate, but no, they were around 90km away. Obviously ‘catch bubbles’ which wouldn’t affect me. They made for a nice photo though. 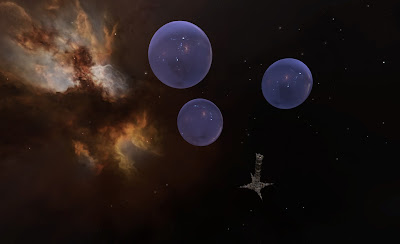 I moved off from the gate to make a gate bookmark, for safety’s sake, and pondered that it’s been a long time indeed since I last saw some warp bubbles. Brought back fond memories of bubble camps in OUCH…

As I was moving away from the gate, I was watching a bunch of E.B.O.L.A. guys in T1 and faction frigates getting caught in the bubbles and play around them like bees around flowers. No one attacked them though, so the owners had probably moved on some time ago.

I finished my bookmark and decided now would be a good time to get some sleep. I warped off to the sun so I could log off without anyone seeing me.