Well that was fun. So I jumped into…

I tried to create my new corp while I was in this system, except I found that I needed to be docked to create a new corp.
Right. Back to the nearest station then! Which was E02-IK.
So I went back there, docked up and made the new corp. That was pretty exciting. Then I advertised it on the Eve Online recruitment thread, as well as wrote a blog post about it.
I managed to get two new members almost immediately! That was really exciting, and I did a bit of dancing around the cockpit. Which would have been better if the capsule wasn’t filled with all this damn goop!
So then I had to leave the capsule and go to a bar in the station, bringing the crew with me, ’cause you can’t really party while stuck inside.
I don’t remember much after a couple hours of drinking it up, but I woke up back in the ship, thanks to a very friendly and dedicated crew. They’re awesome. It’s good that they support my desire to travel around the galaxy without losing the ship. It’s a great ship, and a great crew, and no one wants to die. I really don’t blame them.
So, on with the journey. Back up the pipe to 8YC-AN and then onwards!
This part of the region seemed pretty busy with members of the Hashashin Cartel in most of the systems I went through. I usually take it upon myself to wave or say hello to people in local. Sometimes they say hi back, but most of the time they say nothing. This was the case with most of the Hashashin guys I saw, until I reached U3K-4A. There was a ‘civil’ member of the cartel who talked to me, a fellow by the name of SublimeDestruction. Well, I considered him quite friendly, but he wanted me to make it clear he was civil rather than friendly. Sure. 🙂
We got to chatting, and I shared this blog and the details of my journey with him. He recommended I put this on Reddit, which I’ll do soon. I also got a bit of gossip from him.
He told me there’s been a ‘bunch of shit’ going on in Scalding Pass. He was on a roam last night and they found ‘a ton of dead shit’, and recommended I go there to have a look. Unfortunately, I won’t be visiting Scalding Pass for a while yet. I’ll be going through Cache and Insmother before I get to Scalding Pass.
But I’m sure I’ll still find a ton of dead shit along the way!
I really enjoy meeting people out here. Most people are pretty friendly. Sorry, civil…. I think that’s awesome.
After making a bookmark off the gate in U3K, I warped back into OK-6XN to continue on my way.
Y7-XFD
I love these landmark systems. Always opportunity for photos, which is fun. In this system was another abandoned ship wreck. 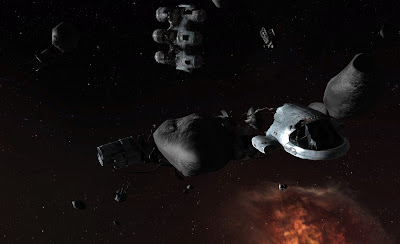 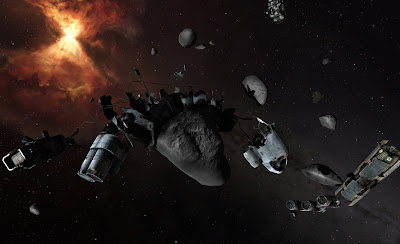 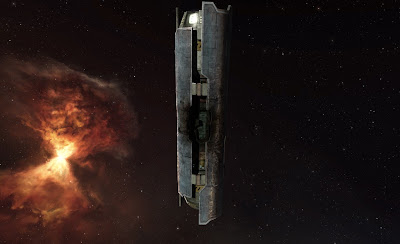 I always feel really sad when I see sights like this. The people that lose their lives in accidents like this, the dreams that are snuffed out, the families that are torn apart or completely destroyed.
Very sad.
Time to move on.
168-6H
I was going to stop and rest in this dead end system, but upon arriving there was about 7 pilots from the Border World Enterprises corp in here. They were a quiet bunch, not talkative at all. So after I made my gate bookmark, I decided I’d leave them to it.
0NV-YU
Nothing of interest, but I’m resting here for the night. See you tomorrow!
Bookmark the permalink.