An interview with a fellow traveller

It’s becoming a bit of a habit, which I don’t mind at all – interviewing people that I find as I travel around New Eden. I really enjoy this, finding people to interview, and exploring their experiences and their motivations and their goals. Everyone in New Eden has a story, and I love finding out a bit about their story.

Today’s interview is with Mercurye, a fellow traveller who I met via the New Eden recruitment forums. One thing led to another, and here’s the interview I did with her. I hope you enjoy! 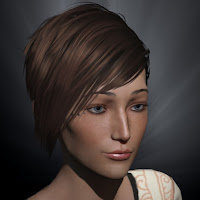 Hi Mercurye. Thanks so much for this interview, I really appreciate it! So can you tell us a bit about yourself? Who are you and what do you do?

Well I am Mercurye or Murky for friends in-game. I don’t really have a set profession in the game but if there’s one word I identify with its ‘Nomad’. My activities consist of a mix of exploration, random chattery, various types of PvP and wandering around trying to get some inspiration.

And how long have you been enjoying the nomad lifestyle?

Since my first steps in EVE in the summer of 2005 I think.

You said you’ve been wandering around trying to get some inspiration. Have you been doing that for the past 8 years? Have you ever found inspiration during that time?

Yes and I usually find it when I don’t go looking for it, very cliché but true. Whether it’s a person you meet or an adventure with your ship (gone terribly wrong…). It often gives me a new look on what I could do in EVE. I dont mind settling down in an area I like but there’s always that nagging feeling of missing experiences elsewhere, and that’s why I keep moving really. The most recent one was meeting you and Touring New Eden, which started just by a friendly bump on the forums by me.

Do you remember the longest you’ve settled down in any area?

It’s probably the area I am moving from now, in the Everyshore region and I’ve been here on and off for about 1 year. I just see it as a home to come back to from travelling. Our corp actually just became 1 year old so we’ve celebrated it with a ‘parting’ Badger event from the area with our closer friends and I re-did the corp logo. Very insignificant for most people perhaps but its the little things that count to me. While I am not really into RP myself I think our new area will be themed better for the lifestyle, so I am looking forward to that.

I’m one of those that think the little things matter a great deal. New Eden is a grand mosaic of both small and mighty experiences, and it’s often the small experiences that matter the most. But anyway… you and I met vai the recruitment forum. Do you go looking for other travellers to encourage and say hi to, or do you just stumble upon them in your travels and offer them your support?

It’s mostly the latter, because I don’t feel comfortable being in the spotlights too much and you don’t know if people appreciate it. I’ve met amazingly kind people in the game but a good amount of rude ones aswell so you can’t always tell if it’s someone you should be overtly open to. But I cherish the people I end up chatting with, whether its a fellow traveller or even a ‘victim’ in PvP. I’ve sent many pilots to a befriended corporation. I just enjoy seeing people enjoy the game and sharing that experience, don’t bottle it up!

Do you have any goals, other than casual exploration?

Well my on-going goals are meeting new friends, being competent at PvP and experience the evolution of EVE. Ususally when I set clear cut goals like “Gather this much isk,” or “Join an alliance so you can experience this,” I end up feeling like it’s work. I also like to contribute in some way to the EVE community and New Eden but that’s something most of us want in some way. Thinking back on the amount of people I tried helping find their personal ‘Happy’ place in EVE and being generous gives me a good feeling about it. It’s a bit like the mother who doesn’t get to be frontpaper news but has a special place in the hearts of some people 🙂

So while enjoying the nomad lifestyle, you do a bit of exploration and occasional PVP against pilots who get in your way? Do you make much money from that?

The PvP aspect is a bit hit and miss like exploration itself can be. If the person is willing to pay ransom I will always honour that. Mostly however you either have people who outright reject it or try to turn the tables. When I attack someone it’s not to ruin someone’s day but to make a profit and a personal achievement. I accept that people get angry, shouty even because they think you are just pure evil. If I get a kill or a ransom and a nice chat afterward I’m at my happiest. Does this make me a pirate? Maybe, but I leave enough people just be to make me consistent at it.

Is there anything else you’d like to say to our readers about yourself, your philosophies, motivations or activities before we close this interview? A parting thought or comment?

If there’s anything I still want to say – we talked so much already!-  it’s just something that I keep thinking about: Dont let others dictate how you should play…whethers its a Null-sec blob or missioning, it all has its value. I also hope to see your Touring New Eden initiative grow, it has definately been a welcome surprise to me.

Thank you so much for your time, I really appreciate it! It’s great to talk to people and find out what they do and why they do it.